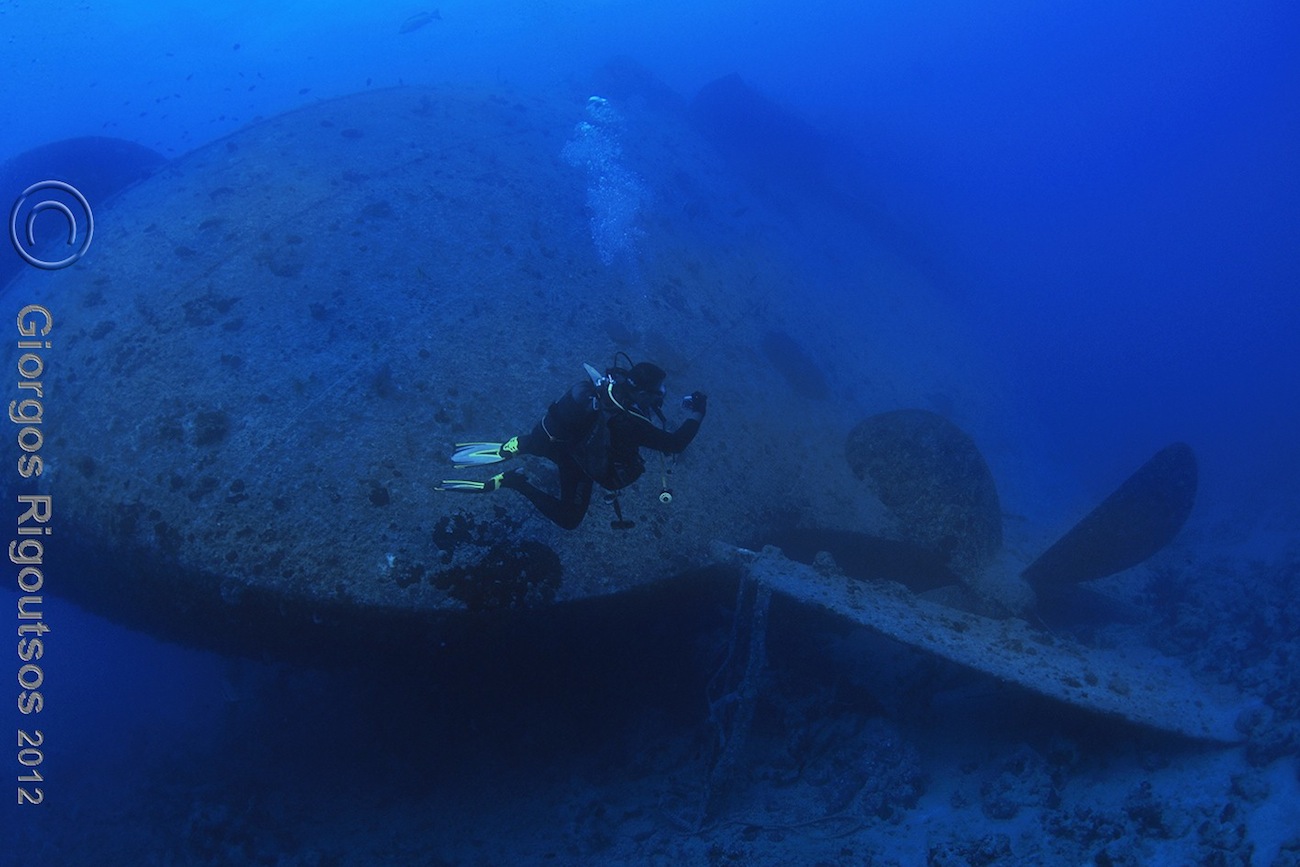 Καταδυτικά σημεία
06/05/2018
Dive type: Wreck diving Depth: 16 – 33m Visibility: Medium to good Currents: Strong to medium (usually from N to S) Surface conditions: Site open to all directions, Water temperature: 22 (Jan-Apr)- 28°C (Aug-Oct) Experience level: Advanced due to currents and need of penetration to roofed areas. Best time to visit: Possible all year round. Distance: 30nm west of Sharm El Sheikh Access: Daytrips (from Sharm) and liveaboards (from Sharm and Hurghada). The local dive masters boast that Thistlegorm produces more annual income to the tourism industry than the Giza pyramids! They might exaggerate but the truth is that this wreck is one of the most popular dive sites of the world. It was the 6th of October 1941 when SS Thistlegorm was hit. Two German bombers were returning to their base in Crete having failed to spot their primary target, a troop carrier, when they noticed the huge freight ship laying on anchor. Just two bombs did the trick by igniting the ammunition load. Nine members of the crew died that night and every time that I humbly dive their wet grave, I bring them up to my mind and pay my respects. I eager you to do the same. Day after day, many liveaboards (with a maximum of 20 divers each) and as many day-boats (with another dozen divers each) moor on Thistlegorm. Fortunately this sunken ship is immense in size! Her length is 127m, her beam 18m and a diver can easily penetrate into her huge cargo holds (three in number, divided in two levels), making it possible for a big number of divers to explore this magnificent wreck simultaneously.

At least two dives are needed to visit every corner of her (depending on the air consumption, more dives may be needed).

The visibility is usually fair but this is highly affected by the prevailing current that stirs up the sandy plateau that extends for miles in this area. If you are lucky enough to dive at slack tide, the visibility can be great. 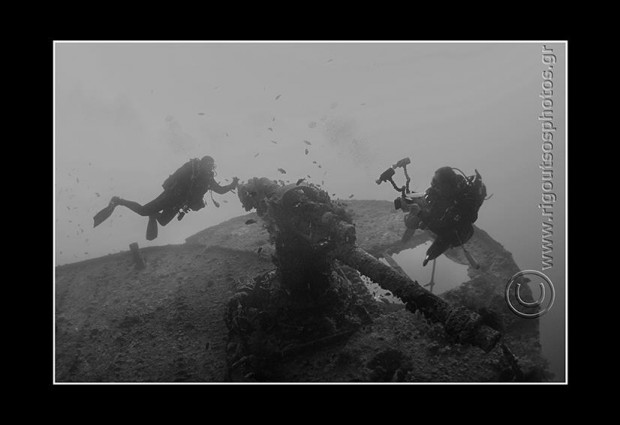 The ideal way of visiting Thistlegorm is by liveaboard. This way you will be able to dive the wreck before the day boats arrive and to do a night dive as well. The usual plan for the first dive is to descend straight to the middle section (using the dive boats’ moorings to the ship’s body), penetrate the holds, move fore and ascend to the bow section. Then move aft over the main deck and ascend to the surface from the middle section. Trucks, jeeps and motorcycles, airplane engine parts and wings, riffles and boots, electric generator spare parts and many smaller articles may be found in the holds. Soldier and squirrel fish are abundant in here, turtles can be seen from time to time. On the deck two train cargo wagons are still attached, although the one on the port side was dangerously tilted the last time I was there. At the bow, the main points of interest are the large winches and the anchor chains. Wrasses, angelfish and anthias add some color to the monotonous “industrial” scenery here. 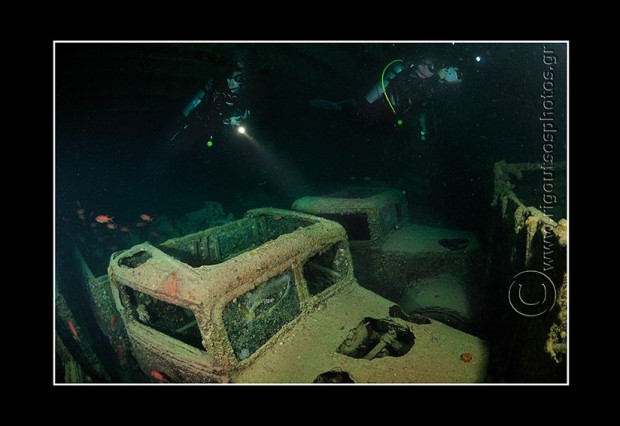 The second dive may start again on the middle section but this time the diver must descend straight to 30m, on the port side, in order to find the locomotive that lies on the sea bed. It is located a few meters off the ship. Then cross the completely destroyed middle aft part of Thistlegorm -where two upside down small tanks and lots of artillery shells can be found- and move starboard to the huge single propeller. Amid millions of glass fish and fusiliers, dozens of snappers and other predators like lion fish, ascend to the stern deck to observe the anti-aircraft gun and start moving fore to the bridge. If the current is too strong, keep close to the structure for shelter. If there is bottom time and air available you may explore the superstructure but nothing really interesting lies here (except, perhaps, the captain’ s bath tub.) There are no corals anywhere to be found on Thistlegorm, probably due to the vast numbers of visitors. Ascend can be tricky due to strong currents and it is highly important to constantly hold a mooring line. While on safety stop big schools of batfish and a couple of huge napoleons will keep you company, drawing a last, fine touch to a superb dive. To get a feel of what an experience a Thistlegorm dive can be, check out our video post.

ALL POSTS BY Geo Delveroudis

divetrip diving trips liveaboard liveabord manta palau red sea scuba travel spotlight trip whaleshark Ερυθρά ταξίδι
We use cookies on our website to give you the most relevant experience by remembering your preferences and repeat visits. By clicking “Accept All”, you consent to the use of ALL the cookies. However, you may visit "Cookie Settings" to provide a controlled consent.
Cookie SettingsAccept All
Manage consent

This website uses cookies to improve your experience while you navigate through the website. Out of these, the cookies that are categorized as necessary are stored on your browser as they are essential for the working of basic functionalities of the website. We also use third-party cookies that help us analyze and understand how you use this website. These cookies will be stored in your browser only with your consent. You also have the option to opt-out of these cookies. But opting out of some of these cookies may affect your browsing experience.
Necessary Always Enabled
Necessary cookies are absolutely essential for the website to function properly. These cookies ensure basic functionalities and security features of the website, anonymously.
Functional
Functional cookies help to perform certain functionalities like sharing the content of the website on social media platforms, collect feedbacks, and other third-party features.
Performance
Performance cookies are used to understand and analyze the key performance indexes of the website which helps in delivering a better user experience for the visitors.
Analytics
Analytical cookies are used to understand how visitors interact with the website. These cookies help provide information on metrics the number of visitors, bounce rate, traffic source, etc.
Advertisement
Advertisement cookies are used to provide visitors with relevant ads and marketing campaigns. These cookies track visitors across websites and collect information to provide customized ads.
Others
Other uncategorized cookies are those that are being analyzed and have not been classified into a category as yet.
SAVE & ACCEPT